Home / Article / When Music is Medicine

When Music is Medicine 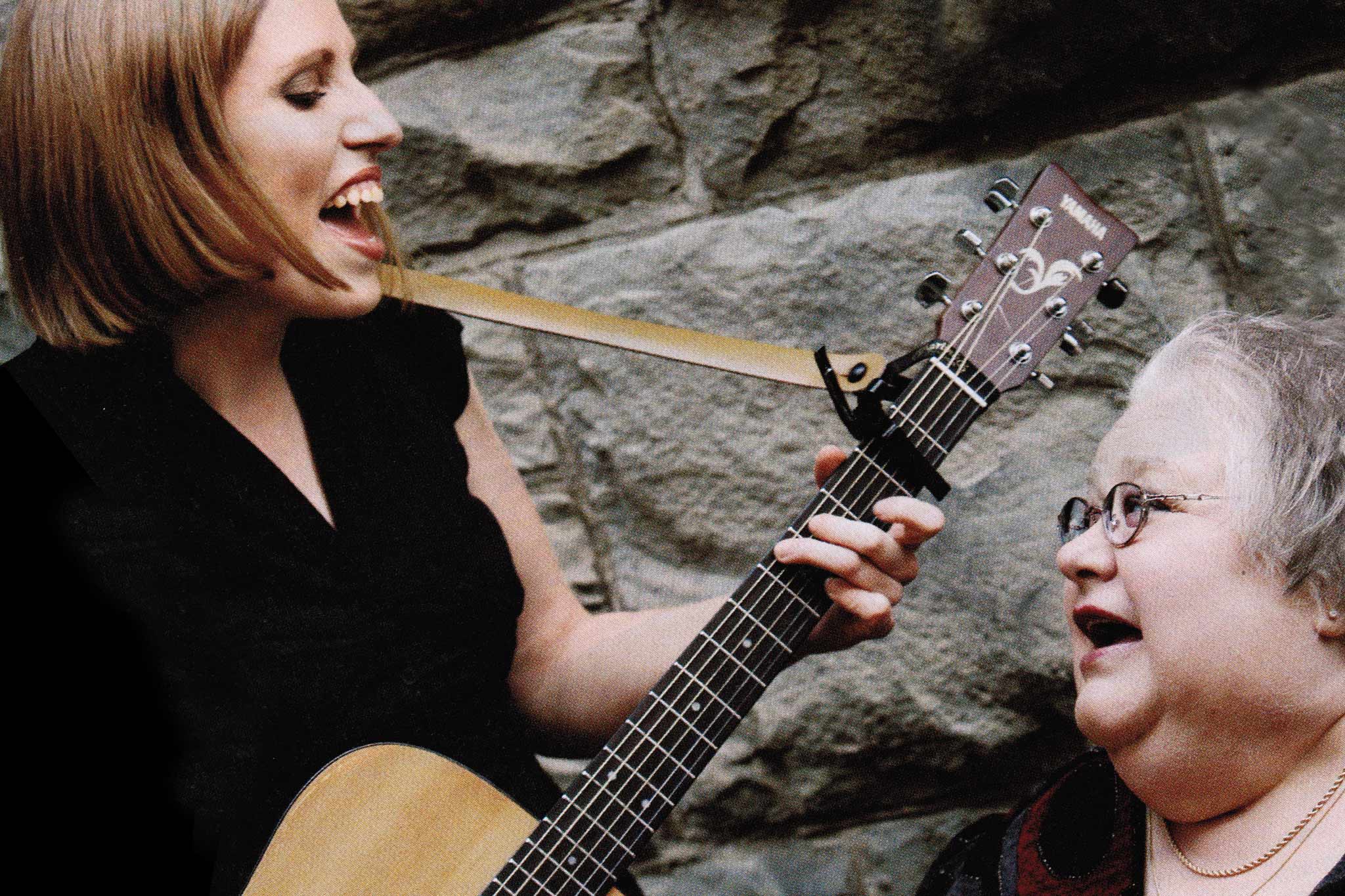 When Music is Medicine

“I think music in itself is healing. It’s an explosive expression of humanity. It’s something we are all touched by. No matter what culture we’re from, everyone loves music.”

Music has long been known to “soothe the savage breast,” but increasingly, health professionals are using music to treat mental and physical ailments too: everything from depression and addiction, to MS and stroke.

It’s a Tuesday afternoon and Carol Martin has already sung her warm-up exercises at her Victoria home and crooned her way though “This Little Light of Mine”. Now she’s attempting to sing “Hey Good Looking”. Michelle Lawrence sings each phrase and waits for Martin to add in the last words, “looking“, “cooking“, “maybe” and “baby“. But the duo just can’t get their act together – because they keep breaking out in laughter.

While this may look like a get-together of music-loving friends, it is actually a music therapy session. Lawrence is a certified music therapist and this is serious treatment for a stroke Martin had about two years ago. The former government employee was left with aphasia, the loss of ability to produce and understand language. It left much of her speech incomprehensible. Not only did she have a difficult time trying to mouth words, she often couldn’t grab the right ones to express herself properly. Then, in May 2007, she began music therapy at the suggestion of a friend who had read about it and thought it would suit Martin, who had a musical past. By filling in the lyrics to “This Little Light of Mine”, one key word at a time, Martin is now able and confident enough to sing at church and has regained 80 per cent of her speech. “It was a godsend that Michelle came into my life”, says Martin, taking a break from her weekly session. “I still have to learn more, and it’s hard work to do it, but it’s a lot of fun”.

Stroke recovery is just one area in which music therapy has displayed its powerful rehabilitating effect. It has also helped with patients suffering from developmental and learning disabilities, Alzheimer’s disease and other aging-related diseases, substance abuse, brain injuries, physical disabilities such as multiple sclerosis, and acute and chronic pain. While researchers are still trying to figure out just why and how music is so effective, hospitals around the world are introducing music therapy to complement other forms of treatment. Not only is music therapy valuable for patients who aren’t physically of psychologically ready to start other kinds of rehab, but in it’s most basic form, music therapy is easy to do – its beginnings are as simple as popping in a patient’s favourite CD and hitting play.

We are all hardwired to process music, no matter what our physical or cognitive state. “For the thousands and thousands of people I have seen over 30 years, something will connect: an instrument, a type of music, some sort of engagement”, says Dr. Johanne Brodeur, music therapy director at the Victoria Conservatory of Music. She turns to neurologist Paul MacLean’s hypothesis of the tri-layered triune brain for explanation. Think of the brain as having three separate-yet-interactive layers: the top layer, the neocortex, deals with language, logic, planning and other higher cognitive functions; the middle layer, the limbic system, deals with emotions; and the bottom layer, the reptilian complex, deals with our most primitive survival functions, such as digestion, reproduction and breathing. So what does all the scientific jargon mean in terms of music?  Even if the sophisticated neocortex and emotional limbic system have been damaged, as long as the reptilian layer is intact, it may be able to react to music, explains Brodeur. “You respond to it because rhythm and sound illicit a primitive reaction”, she says. And at this basic level, “You can engage someone just to engage them”.

There is not just one musical centre in the brain; functional brain imaging shows that some 20 areas respond to music, and that music works in both the left and right hemispheres (perception of rhythm, pattern and lyrics on the left, for example; processing melody, pitch, patterns and style, and identifying musical chords on the right). So even though a stroke survivor might have lost her ability to speak (a left brain function), she may be able to sing phrases like “Hello, how are you” to facilitate speech recovery.

“The right hemisphere, which in normal circumstances has only the most rudimentary linguistic capacities, can be turned into a reasonably efficient linguistic organ with less than three months of training,” writes Dr. Oliver Sacks, a renowned neurologist, in his book Musicophilia (Knopf, 2007, $34.95). “Music is the key to this transformation.”

Sacks has experienced music’s ability to heal, not only as a doctor but also as a patient. In Musicophilia, he recounts how he was able to hike down a mountain to the beat of “The Volga Boatmen’s Song” after tearing a tendon in his left leg, and how he relearned to walk with Mendelssohn’s Violin Concerto in E minor.  Music, he writes, kick-started his damaged motor system into action and helped the natural rhythm of his walk return.

Studies have shown that physical discomforts, from postoperative pain to the chronic aches of arthritis, can be relieved, or at least lessened, by listening to music. Researchers at Yale University’s School of Medicine found that patients who listened to their favourite music while awake during surgery needed less sedation than people who did not listen to music. Gentle music also has the power to distract the mind and lower heart and breathing rate, all of which help to alter the perception of pain or reduce tension in the face of pain.

Imagine dancing with your husband or strolling through the park and suddenly, without any warning, being unable to take another step. This kind of gait-freezing strikes some 40 per cent of people who have Parkinson’s disease. But music can have a sort of thawing power, allowing sufferers to regain the ability to move, if only momentarily. “There seems to be this overriding effect of music on the movement system,” explains Lesley Brown, associate professor of kinesiology at the University of Lethbridge in Alberta. Brown is part of a team led by Dr. Bin Hu, professor of neurosciences and codirector for the movement disorder and therapeutic brain stimulation program at the University of Calgary. One of the team’s goals is to figure out the best way Parkinson’s patients can use music in their activities (such as during exercise), and the best piece of music to listen to, so that over time music becomes a natural trigger for movement. The theory is that the brain cells that sense music not only function well in people with Parkinson’s, but that they also send many connections to the parts of the brain that control movement. These “music cells”, when active, may release certain chemicals that let the person’s stride continue.

Music therapy also appears to have an effect on other neurological disorders, from calming the explosive movements of Tourette’s syndrome sufferers to inciting recall in Alzheimer’s or dementia, music is the one thing that they most often respond to”, says FranHerman, a pioneer of music therapy in Canada and former chair of the Canadian Music Therapy Trust Fund, a nonprofit initiative that has raised funds for music-therapy-related projects across the country. “We know of literally thousands and thousands of cases of people who cannot speak anymore, who do not recognize their families, but if you put on a song rom when they were younger, they will sway to it, they may hum to it, they may even say some of the words to it. That happens because the part of the brain that receives the musical messages is not destroyed by disease or by accident”.

Music is also helpful therapy for those who have had a stroke. In a Finnish study published in the February 2008 issue of the journal Brain, verbal memory improved by 60 per cent in stroke victims who listened to music, compared to 29 per cent in those who did not. Focused attention – being able to resolve conflict and perform mental operations – improved by 17 per cent in the music group, but not at all in the non music group.

Music also helps stroke patients relearn how to use their muscles and, as in the case of Carol Martin, how to speak. When dealing with physical rehabilitation, Michelle Lawrence, a music therapist with the Victoria Conservatory of Music, looks at functional movement – range of motion – and then at how the body moves; to brush your teeth, for example, you have to raise your arm and bend your elbow. “If I want the arm to lift, musically I would play something that goes from low to high, as I would want that person to move with his or her physical body”, she explains. “If it required something with a lot of muscle movement, I would play something really loud. To lower the arm, I would play something that would go from high to low, and a little bit softer”.

With speech rehabilitation, a familiar song is an ideal way to get a patient to participate. Since Martin is an avid churchgoer, she and Lawrence chose the struggle-conquering spiritual “This Little Light of Mine” to draw out her speech. “[My patients] will just naturally want to sing the last word of the phrase, whereas if I was speaking a sentence, they wouldn’t jump in as much”, Lawrence explains. “Their speech may never improve to it’s original level, but people will be able to understand them”.

For someone who has been traumatized by accident or illness, sometimes music can provide a breakthrough. One of Herman’s patients was an 18-year-old who was hit by a car when riding her bike and thrown 20 feet. “At the rehab centre, if you saw her, you would not believe that this was once a very beautiful young girl”, says Herman. Her teeth had been knocked out, her hair was shaved, she couldn’t feed herself, she could hardly speak. She was antagonistic, uncooperative, and no one – not the nurse, the occupational therapist, the physiotherapist, the speech therapist – could get anywhere with her.

“But she was willing to come to music. She did not speak to me, she did not look at me. She just sat in the room”, recalls Herman, who would play different kinds of music either by cassette or at the piano. Sometimes Herman would talk to the teen, sometimes she would not.

Then, on the fifth day, Herman sat down at the piano, and played some blues. “I looked at her and she lifted her head and gave me eye contact for the first time ever. I just kept playing, I didn’t say anything. She just looked at me and muttered, ‘Yeah, yeah, yeah’. Music, that day, finally got through to her. It was the beginning of her rehabilitation”. The teen continued with music therapy, and, although there was no miracle cure, as time passed she was able to try other rehabilitation activities.

More research on music’s influence on the brain and role in therapy is being done as scientists discover just how much of an effect music can have on an individual. “Music is a part of our lives. It’s a part of every culture. It’s a part of every day”, explains Brodeur. “So it is crucial to really understand the impact music – harmony, sound, rhythm – has on a person’s life”.

More than 200 years ago, German Romantic poet and theorist Novalis knew just how important music was to our health and well-being. “Every disease is a musical problem”, he mused. “Every cure is a musical solution”.